Why is victoria’s inner harbour so polluted?

Victoria’s inner harbour is the most polluted waterway in BC. This was officially announced in 2018 after the PollutionTracker (created by Ocean Wise) study was completed. The inner harbour has a long history, coming from only being used by First Nations people to now being used for Recreational docking, water taxis, small cruise ships, float planes, and whale watching. In the summer it will also be used for markets, shows, festivals and more. Since the inner harbour is used by so many people, it only gets more polluted everyday. From oil spills to basic littering, it’s only going to get worse. At the point the harbour is at now, there is almost no hope for it to ever become a healthy waterway again, which is the saddest part of it all. Fish, plankton, shellfish, sea plants and more are dissipating due to the pollution. The undersea view of the water is simply gross, it’s green/brown, plastic and other litter everywhere, the plants look dead and almost nothing is thriving.

What is The Pollution Tracker Study

1In 1 playlists
By Anonymous
The PollutionTracker (created by Ocean Wise) study was launched in 2015 and finished in 2018. This study was an integrated, partner-supported pollution monitoring network for Coastal British Columbia. The study would collect sediment and mussel samples from 55 locations, which included 4 sites in Victoria’s harbour. In 2018 this study found that Victoria’s harbour is the most polluted waterway in all of B.C’s coastline. High-levels of contaminants were found in said samples, including PCBs (polychlorinated biphenyl) which are currently banned. They also found lead, mercury, flame retardant, hydrocarbons (PAHs), pharmaceuticals, and more. Peter Ross, executive director of the Coastal Ocean Research Institute, said he was surprised when the high contaminant levels in the water was not just one type of contaminant. "It was basically everything," Ross told On the Island host Gregor Craigie.         "British Columbia Parliament Buildings (5)" by lt_paris is licensed under CC BY-NC-ND 2.0

What Chemicals Are Polluting The Harbour

1In 1 playlists
By Anonymous
High concentrations of dozens of chemicals were found in the water of the inner harbour. That would include mercury, lead, PCBs (Polychlorinated biphenyl), and PAHs (hydrocarbons). To get a better sense of what these harmful chemicals do to the water when PCBs enter they can be released into the groundwater with no possibility of return and don't tend to break down, accumulating in the ocean for nearly ever. “PCB levels in habitat, including sediments, are high enough to contaminate the food chain and deliver PCBs to our killer whales” said Peter Ross, the executive director of the Coastal Ocean Research Institute. Mercury will affect trees and plants more, causing them to decay and form a low-oxygen environment. The bacteria that converts mercury to its most toxic form would thrive and the mercury would accumulate into the fish in said environment. When lead is put into ocean water it will mainly affect marine life lethally. Lead accumulation in fish tissues will cause oxidative stress due to excessive ROS production. Oxidative stress caused by lead exposure will induce neurotransmitter malfunction and synaptic damage in fish as neurotoxicity. Lastly, when PAHs (hydrocarbons) contaminate the water it causes an avoidance of light trying to get into the water and the exchange of gases for consumption of aquatic plants. Without the ability to process gas or sunlight also known as photosynthesis or chemosynthesis these aquatic plants can suffer sub-lethal to lethal effects.

How Does Pollution Affect Marine Life

1In 1 playlists
By Anonymous
Majority of the chemicals that are polluting the inner harbour don't break down. This means they'll be found persisting in the water, accumulating in many things including killer whale food webs. Some marine life that may be in the food webs are phytoplankton, seaweed, crab, zooplankton, krill, fish, and more. All these are affected daily by man-made pollutants like pesticides, herbicides, fertilizers, detergents, oils, industrial chemicals, and etc. These man-made pollutants are affecting the salinity, density, dissolved oxygen levels, pH levels, and all parts of water quality. Dissolved oxygen is the level of free, non-compound oxygen in the water, it is basically the amount of oxygen that is available for all living organisms in that body of water. A change in pH levels can affect how marine life functions, for example, some fish are less likely to detect predators in acidic waters. When fish are exposed to oil they can get enlarged livers, reduced growth, changes in heart and respiration rates, reproduction impairment, and fin erosion. In addition, fish eggs and larvae can have lethal or sublethal effects. Pollutants like plastic straws, plastic cups, six-pack rings, and any other plastic waste can be caught on or ingested by marine animals. Plastic is one of the biggest problems of water pollution despite being the most commonly known pollutant which many people already know the effects.

How Does Pollution Affect Humans

1In 1 playlists
By Anonymous
Normally, you would think ocean pollution only affects marine life but it actually affects humans too. When humans are exposed to the toxic chemicals in water for a long period of time, it can result in dangerous health problems. This would include, hormonal issues, reproductive issues, and damage to the nervous system and kidneys. If you were to go more in detail, adult mercury exposure will increase the risk for heart disease and dementia. If you ingest a high amount (not likely) it can cause amnesia, paralysis, and even rapid death. However, if inhaled too much you can receive asthma as a result.  Plus, the ocean produces half of the Earth’s oxygen levels and 50 times more carbon dioxide than the atmosphere which if affected by pollution too much, is an issue for humans.

How The History of the Harbour Affected its Current State

1In 1 playlists
By Anonymous
Victoria’s inner harbour was officially constructed in 1903, however it was used before its “official” construction by first nations people who had used the location for hundreds of years. After the harbour was completely built it was used for a lot of heavy industrial activity like boat building and mills. Victoria Councillor Charlayne Thornton-Joe said that "It's upsetting and concerning, I was looking up photos from the late 1800s and you can see the industry that was being done, whether it was ship-building, whether it was mills. All that existed back then, and of course, back then there was no consideration of the environment."The heavy industrial activity that was being done affected the oceans pollution levels because PCBs can be produced as by-products of industrial activity, biomass, and fossil fuel combustion. All the chemicals these mills and industries were using would runoff into the ocean, which were extremely harmful for the environment. Sadly, in other words, they'll be sitting in our waters for nearly forever. The history of the harbour set a permanent mark in the pollution level of the water, what was done in our past is officially un-reversible.

1In 1 playlists
By Anonymous
At the rate we are currently at the harbour’s water has practically zero hope for any return. Not only is almost every chemical in the water unable to break down quickly but there is so much litter due to humans, that it would almost be impossible to get rid of. Furthermore, it takes years even decades for the water to naturally clean itself from all the harmful substances and even with advanced technology, it could still take ages. In addition to that, the people with the power to make a change don’t care enough to do anything. The more we ignore the issue the more the harbour will increase in chemical and physical pollution. As well as the pollution more sealife will dissipate from the harbour causing the ecosystem to crash and suffer.

How Recreational use of The Harbour Contributes To Pollution

1In 1 playlists
By Anonymous
The inner harbour is used daily by a variety of boats and businesses making it very crowded in and around the ocean. These boats contribute to pollution in many ways but the worst of it all is oil, gas, noise, littering, and disruption. Boat propellers drown out marine animals trying to communicate making it almost impossible for them to hear each other which ultimately affects the essential need for things like hunting and finding a partner. Not only do the boats make noise pollution but seaplanes and humans contribute as well. The activities in the harbour can also physically disrupt the ecosystem, for example, it could derange the schooling structure for the fish. In addition, plastics are constantly being dropped or thrown into the water by the mass amount of people who visit every day. All these different types of pollution will lead to animals ingesting garbage as well as the water quality increasingly getting worse. This inevitably will lead to dying ecosystems and the death of many marine animals. However, as bad as the pollution gets it shouldn't affect the current recreational use of the harbour and businesses will continue to run smoothly. Nevertheless, the constant use of the harbour will speed the declining health of the ecosystems. 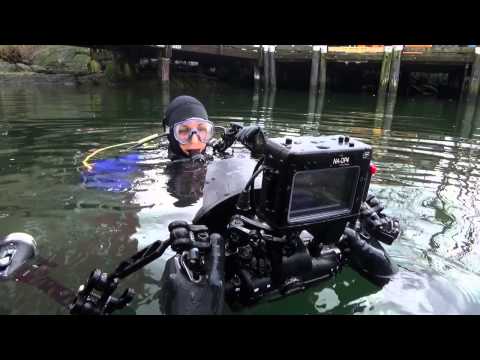 Below The Surface Of Victoria Harbour (Video)

1In 1 playlists
By Anonymous
In this video, Hakai Scholar and marine biologist Jenn Burt went scuba diving under the waters of the inner harbour. Her first impression was mainly rocks, muddy, beer cans and plastic bottles. However, when she looked further she could see the impressive biodiversity the harbour really has. As she stated in the video “it’s like a rainbow of colours down there, it’s pretty cool”. Sadly, near the end, Jenn talked about how much garbage was down there, from old cell phones to multiple shopping carts. This is real life under the water of the harbour, colourful but sad. 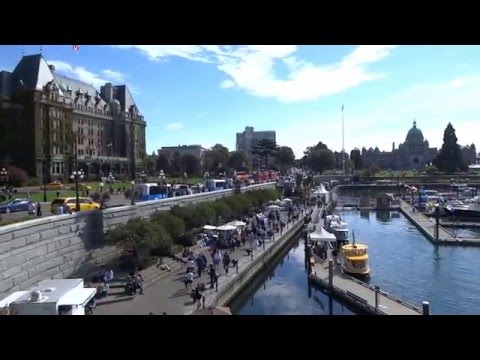 1In 1 playlists
By Anonymous
This video shows you what a day in the harbour looks like from a human's perspective. You can see crowds of people by the water, multiple seaplanes, ferries, and water taxis. All of this is daily, that huge boat leaving the harbour is daily, the crowds are daily. The disruption will almost never stop. At the end of every day, there is more pollution. Litter being is being dropped everywhere. Music is blasting in at least two of the clips, there is almost never a silent moment in the video. Think about how calm and nice the harbour would be without half the stuff going on. No matter how normal it may look, it needs to change.

1In 1 playlists
By Anonymous
Why is victoria’s inner harbour so polluted? The high amount of pollution is due to the history of the harbour (heavy industrial activity), which released many harmful chemicals into the water including currently banned PCBs. The amount of chemicals polluting the harbour is concerning and irreversible. How we have used it since then and currently also has a huge effect on the high pollution levels. Due to the recreational use of the harbour, oils and gases are being released as well. Along with all of that, plastics and other wastes like metals and personal items are dropped in daily. Not only is the water quality an issue but the health of the marine life is at risk too.