How do Specific Issues Impact Life in Bowker Creek?

This playlist goes in depth into the issues surrounding Bowker Creek, and what we can do as a community to lessen the impact of these issues. Enjoy!

The history of Bowker Creek

By OB H
Bowker Creek is roughly 8 kilometres long and starts at the University of Victoria campus. The freshwater creek continues flowing south, eventually reaching Oak Bay.  The creek was named after John Sylvester Bowker, an American settler who came to the area in the 1860s. Historically, Bowker creek was home to many fish like chum and coho salmon. First Nations communities relied on the creek as a source of food and fresh water.

By OB H
In 2015, Oak Bay High School and the Greater Victoria Green team rebuilt the creek channel, adding in native vegetation along the creek bank. The collaboration also included building an outdoor classroom space and trail to use.

By OB H
On November 18th, residents of Oak Bay reported seeing thin green and white pieces of plastic strands in Bowker Creek, storm drains and on the sidewalks. It was later discovered that the strands were from the outdoor soccer turf at Oak Bay high. This is particularly worrisome as Bowker Creek connects to the Salish sea, where the strands could be entering. The turf has been shedding an alarming amount of plastic into the environment, which has caught the attention of the Greater Victoria School District, who has indefinitely closed the field as of now.

By OB H
Although Bowker Creek is a small freshwater stream, water quality conditions prevent a diverse fish population from thriving. Improvements such as controlling the treatment and drainage of water from high traffic areas in recent years  will significantly improve the water quality. Runoff from the roads can pollute the water with unwanted debris.   Filtering the runoff before it enters the creek and reducing illegal littering will also contribute to the cleanliness of the creek.

Pieces of plastic in the creek

By OB H
Ducks are very abundant in Bowker Creek. Because it is so close to a high school, it is inevitable that plastic litter from students will enter the creek. This can have detrimental effects on the ducks. The birds mistake the plastic debris as food, which can lead to indigestion and death. According to the Monterey Bay Aquarium, one study found that 97.5% of chicks had plastic in their stomachs. Plastic found inside birds includes bottle caps, bags, and other litter. The effects of ducks ingesting plastic haven't been scientifically proven, but it’s believed that it injures or kills the birds by cutting their stomachs.  It is also thought that the plastic can take up space in their stomachs, causing them to feel “full” when they aren’t. 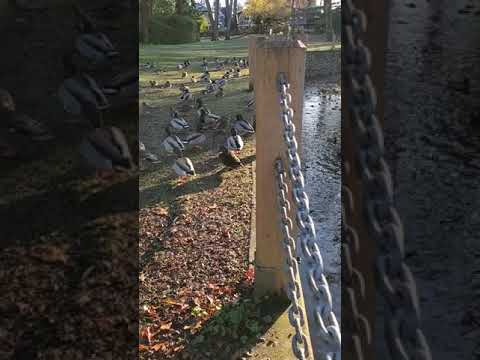 A video of the ducks in Bowker Creek

By OB H
These ducks congregate near the end of Bowker Creek everyday!

By OB H
Floods have been infrequent and limited to certain locations. Flooding at Trent Street due to heavy rainfall threatens numerous buildings surrounding St. Patricks School. The flooding problem in Bowker Creek spans three municipalities and remediation efforts prove to be expensive. To combat the flooding issue, the creek channel was dug out, straightened and enclosed in pipes to increase drainage and lessen the risk of flooding in surrounding areas.

Why should we care?

By OB H
Keeping Bowker Creek clean will have a multitude of aesthetic and recreational benefits. The outdoor classroom near the creek serves as a learning space for the students of Oak Bay High and provides a unique learning experience that not many other schools can offer. The diverse ecosystem gives students a chance to further their understanding on how biodiversity affects an ecosystem, and the effects invasive species can have on native species. Residents of Oak Bay also enjoy walking their dogs or biking on the trail and seeing the clean, vibrant space.

How can we help?

By OB H
Volunteering for community cleanups and being more aware of our ecological footprint can help keep Bowker Creek clean. Making sure you don’t litter into the creek and disposing of your garbage in the correct place will make a big difference. Teaching students about the importance of keeping the creek clean will have significant benefits in terms of reducing waste in the creek. The organisms in the creek will thank you!

By OB H
The issues surrounding Bowker Creek such as plastic entering the creek and the water quality, among other things, have significant impacts on life in the creek. With great efforts, we can reduce the amount of litter in the creek and improve overall water quality. This will create a better environment for not only the students using the learning space, but the entire ecosystem of the creek.