In the process of studying events in history, it is tempting to view them as disconnected or isolated. In reality continuity and patterns of change flow through all of history – the natural history of this province is no exception. It is important to think critically about B.C.’s past and present, so that we can create a better future!

1In 1 playlists
By Lindsay Epp
Explore RBCM's virtual exhibit, Journeys & Transformations to experience some of the diversity of B.C.'s changing landscapes. 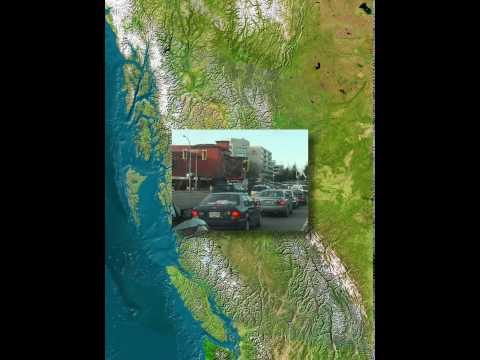 1In 1 playlists
By Lindsay Epp
Previously on display in the Royal B.C. Museum lobby, this map depicts the effects that climate change has had on the province.

Earth is heating up, but why?

1In 1 playlists
By Lindsay Epp
Global warming is a very real threat to the environment. Dramatic temperature changes have happened naturally in the past (for example, the Ice Age) but these changes occurred over thousands of years. The warming we are experiencing now has happened drastically in the past few decades. National Geographic offers many resources to learn more.

1In 1 playlists
By Lindsay Epp
Click here to open the WWF Footprint Calculator! The World Wildlife Fund offers a calculator that estimates your carbon footprint. What can you do to reduce yours?

1In 1 playlists
By Lindsay Epp
Garry Oak Ecosystems have declined to 5% of their pre-contact size. These ecosystems are home to an amazing diversity of life. However, as the ecosystem has been depleted, the native species have suffered. Remaining Garry Oak Ecosystems are home to over 100 species at risk. Click below to learn more about this delicate system.

3In 3 playlists
Some of the oldest fossils in the Royal BC Museum collection are some of the oddest looking too. Learn about the strange forms of early life on Earth.
View Pathway

2In 2 playlists
By Lindsay Epp
No, not that kind of alien. Alien species are plants and animals that are foreign to an ecosystem, usually brought by humans whether intentionally or unintentionally. Alien species affect the balance of the ecosystem and can be harmful to the lifestyle of native species. Scotch Broom (pictured) is an example of an alien species in B.C.

The Warmer the Better?

1In 1 playlists
By Lindsay Epp
Some species, such as magpies, gopher snakes, badgers, and black widows, will become more common in B.C. as temperatures rise and they are able to move further north. What effects might there be on existing species when these roaming species spread into their habitat?  (Image credit: Jerry Kirkhart)

1In 1 playlists
By Lindsay Epp
White sturgeon used to be plentiful in the Fraser River Delta. Now, due to over-fishing and local industrial projects, the white sturgeon population is declining.

Forests of the Coast

1In 1 playlists
By Lindsay Epp
When walking through the Forests of the Coast exhibit, try to imagine what these forests might look like in the future. Will our forests be the same in 50 years? 100 years?

1In 1 playlists
By Lindsay Epp
Interior B.C. has had its fair share of wildfires in past years, and with the temperatures rising and forests drying out, wildfire risk has only increased. This particular photo was taken in 2012 near Peachland. (Photo: Jeff Basset, Canadian Press)

1In 1 playlists
By Lindsay Epp
Students who participate in this program will explore the Natural History Gallery of the museum through the lens of change. Students will be encouraged to ask questions and think critically about how British Columbia has changed over the years and what our province's future will look like.