With Bowker Creek’s restoration underway, is it possible to bring back the salmon population that was historically abundant in the creek?

The Bowker Creek Salmon Run Initiative is a hypothetical blueprint of the specific changes that would need to take place in order for Bowker Creek to regain its salmon-bearing status.

Extra: Our Mission and the Pathway to Our Inquiry Question

1In 1 playlists
By OB25
This document details the process, and purpose of our inquiry and the initial thoughts that lead us to research what would enable the restoration of a healthy salmon run in Bowker Creek.

About Salmon: Understanding the Salmon Cycle:

1In 1 playlists
By OB25
This is a diagram of a salmon's life cycle. Salmon are anadromous meaning they hatch in fresh water, migrate to the ocean, then return to the freshwater to reproduce. The creek would act as a habitat for spawning and unmatured salmon, meaning that Bowker Creek would have to meet several criteria in order to be habitable for salmon alevin and fry.

About Salmon: Which Salmon Species?

About Salmon: Why Coho are the Ideal Species

The Creek: A Problematic Layout for Salmon Travel

1In 1 playlists
By OB25
Adult coho need a clear route to their spawning to lay their eggs. Bowker creek is 60% underground and the network of tunnels through which the creek flows would limit if not block salmon access to estuaries, meaning Bowker Creek is currently unsuitable for supporting a salmon run. View the next slide for a visual.

1In 1 playlists
By OB25
This is a diagram of Bowker Creek’s current state. The blue lines represent the distance of the creek that is above ground and the dotted lines indicate underground waterways including the underground passage of the creek and the storm

1In 1 playlists
By OB25
The 100-year vision for Bowker Creek’s layout shows an almost completely daylighted creek going as far as Mackenzie Road and would be suitable for supporting the travel of salmon from the ocean, The creek’s design will also benefit the water quality and turbidity, making it the first crucial step to making Bowker Creek a salmon-friendly habitat.

1In 1 playlists
By OB25
In order to lay her eggs (called roe), the female salmon uses her caudal fin to dig a shalow hole in the bottom gravel (a redd) to create a low-pressure zone where her eggs can incubate. The female covers the eggs by disturbing the gravel at the upstream edge of her redds. She may make seven redds for her ~5000 eggs. 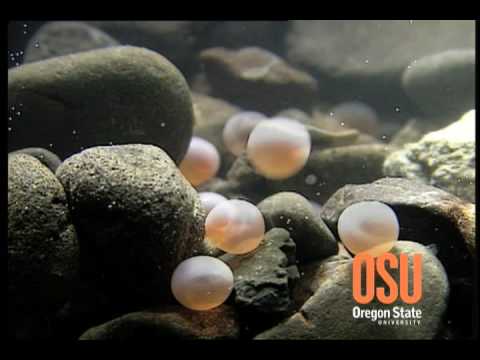 1In 1 playlists
By OB25
The first five seconds of this clip shows a female salmon using her caudal tail to dig her redd. You can watch on to for an enhanced understanding of the salmon-incubation/maturing.

1In 1 playlists
By OB25
Bowker Creek’s gravel doesn't meet salmon spawning requirements (read pdf) The surface has large stones that would be difficult to move and an underlayer that is fine and densely packed. To make the gravel bottom suitable for roe, about 8 cm of new gravel would need to be added to the creek’s floor to meet coho spawning criteria.

About the Salmon: Their Diet

1In 1 playlists
By OB25
When in freshwater, coho salmon feed on plankton, insects, and larval invertabrates, but swtich to a diet of small fish upon entering the ocean. To regain these fish, Bowker Creek needs to have conditions to support populations of plankton, invertabrates and insects - such as stable water quality and ample food. Here are examples of such sources.

1In 1 playlists
By OB25
Restoring the vegetation on the creek bank would contribute to the creek’s marine biodiversity and provide more food supply to help support salmon populations. This is because the decaying plant matter that ends up in the creek could be consumed by the stream invertebrates which act as food for juvenile salmon (alevins.)

1In 1 playlists
By OB25
Part of the 100-year plan is to restore native vegetation on much of the creek corridor. The aim is to recreate the original creekside with as little influence from native plant species as possible. This will help create a better envrionment for food sources. Here is a stetch that has been made of possible  creek bed conditions on Shelbourne Road.

1In 1 playlists
By OB25
Many Parts of Bowker Creek’s water quality are preferable to salmon, such as temperature, pH and dissolved oxygen. It’s nitrogen and phosphate levels should be lowered, but the problem comes with ammonia - a toxic substance bowker creek has too much of. Here is a document detailing the preferred water quality levels for coho salmon.

The Creek: Water Quality and Sewage

1In 1 playlists
By OB25
Bowker Creek has had issues with the sewage system in the past as it follows the sewer line (as seen in the diagram above). Spills have a huge impact on water quality; high levels of nitrogen, phospherous and ammonia are associated with waste. To restore salmon, the stream needs to have a barrier preventing this, as seen in the current CRD plan.

1In 1 playlists
By OB25
The primary focus of the Bowker Creek Initiative is to improve the Creek’s watershed (divide of runoff into water bodies,) because the excess water from storm drains in Bowker Creek is compromising the creek’s habitat qualities in several ways.

The Creek: Problem with Runoff

1In 1 playlists
By OB25
Although our plan for Bowker Creek may seem ideal, there are flaws that we must address before beginning the project. One being, the issue with excess stormwater contributing to the creek's water volume, and because there is plenty road runoff emptying into Bowker, the dirty water affects the turbidity and the salmon cannot withstand the haziness.

1In 1 playlists
By OB25
Turbidity relates to the sediment in the ground - cloudiness, means more particles. These pieces can get trapped in the salmon's gills and suffocate them. In Bowker Creek, the issue is the soil on the side of the banks. Turbidity or haziness in the water can cause many hazards, like suffocating the fish and their inability to see clearly. 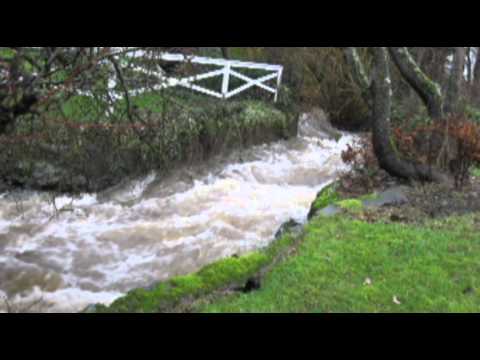 1In 1 playlists
By OB25
The CRD 100-year blueprint is an incredible asset into the return of salmon into Bowker Creek. Focusing mainly on watershed, the action plan for Bowker Creek is to restore it to the pristine conditions it once had. Putting emphasis on community connections, the Bowker Creek Intitative is working to create a salm-friendly habitat once again.

1In 1 playlists
By OB25
A main focus of the Bowker Creek Initiative is to connect the community, which will be greatly impacted by the salmon. Having such an important species nearby allows for learning oppertunities, and having a place where you can actually see these creatures creates an oppertunity for people to learn about how their actions impact living creatures. 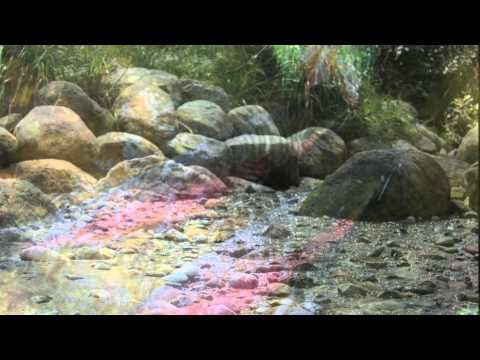 1In 1 playlists
By OB25
In 2011, Spanish banks took on a project restoring its salmon run. The stream had become blocked, and parts were hidden underground. but after clearing the dams, daylighting parts, and restoring natural vegetation, the salmon returned. The story is similar to Bowker Creek - urban devlopement hurt the salmon run, but shows that it can be fixed.

1In 1 playlists
By OB25
Once we have tackled the necessary conditions for salmon to live in Bowker Creek, keeping them here is the next challenge. To preserve the run, a great deal of education must go into the community, and the emphasis on not littering. There must also be occasional clean-ups, to block any dams that have formed and may block the path of the salmon.

1In 1 playlists
By OB25
Our final plan to restore Bowker Creek's salmon is based around restoration: restoring the watershed, changing the flow of the river, creating suitable gravel, providing salmon food, reducing levels of ammonia, daylighitng parts of the creek, and reducing turbidity. While a huge project, it would result in bringing salmon back to Bowker Creek.